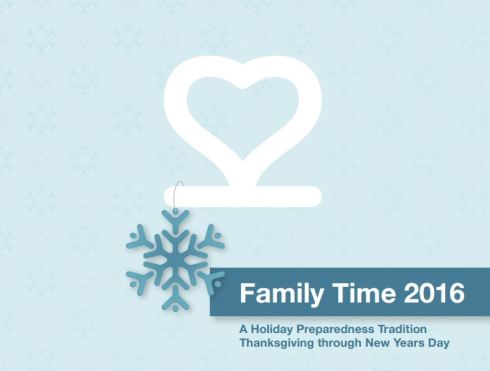 Happy almost Thanksgiving! The holidays are a wonderful time to get together with your people. You could be headed back to where ever you call home or hosting friends and family at your crib. No matter the case we hope you have the opportunity to spend some quality time with your loved ones.

The holidays are also a great time to have a short conversation about preparedness. Why? Because these are your people and it’s important to know how you’re going take care of each other and how you’ll find each other during an emergency.

Don’t know where to start? It’s okay! We’ve created a simple guide for you to get the conversation started.

We wish you the happiest of holidays with your families and friends. We hope to see your hashtags and tags on social media documenting one of the most important conversations you’re bound to have this holiday season, how to prepare!

For more ideas and tips on how to get started on your preparedness efforts, visit us: SF72.org

Today marks 27 years since the Loma Prieta earthquake. Please take a look back with us as we take this opportunity to remember not only the earthquake itself, but more importantly how our community came together then and how it continues to become more resilient since.

Let’s use this occasion to continue to educate one another. Visit SF72.org for more information on how to spread the message of preparedness, and ensure your family and community are ready for anything. 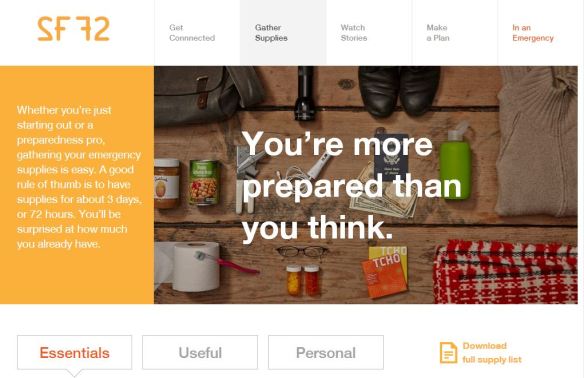 October 17th at 5:04 p.m. will mark the 25th anniversary of the Loma Prieta earthquake. For those of us who were in the San Francisco Bay Area during the earthquake, we saw the region come together and rebuild, and as a result become stronger and more resilient. Whether you were here to experience the Loma […]

Was your household one of the 20,000 SOMA homes without power last night? Last night thousands of homes lost power for about an hour. But this begs the question, what do you do if you lose power for more than one hour?

Power outages are more inconvenient than anything, but they can also be dangerous. Here are some power outage safety tips to keep in mind for next time:

For more information on what do to before, during and after a power outage please visit: ready.gov/power-outages

From March 20 to March 27, California celebrates the 2016 Tsunami Preparedness Week! Though San Francisco’s tsunami risk is low, it’s very important to understand how and why tsunamis occur, and how we can prepare for them.

A tsunami is a series of ocean waves caused by movement of the sea floor. Usually they are caused by a large earthquake (Magnitude 7.5 and above). They can also be caused by a landslide under the water’s surface. Tsunamis can move up to 500 miles per hour in the open ocean, where they are barely noticeable! But as tsunami waves approach the shore, they slow to around 40 miles per hour and grow in height. Tsunami waves can reach as high as 30 feet; however, the size really depends on the topography of the coastline. For instance, a small tsunami on one beach can be much larger at a different beach a few miles away.

WHY ARE TSUNAMIS SO DANGEROUS?

Tsunami waves move the full column of water, from the sea floor to wave surface. That packs quite a punch, and is why tsunami waves can cause flooding in low-lying shoreline areas. Tsunamis also may cause strong, unpredictable ocean currents. For instance, the 2011 Tohoku Earthquake in Japan arrived in California during low tide, so it generated relatively small tsunami waves on the California coast, but resulted in strong currents in Santa Cruz, California that did serious damage to their harbor and boats.

Tsunami waves may fool people who think the danger is over after the first wave comes and goes. A tsunami is tricky: It produces a series of waves, and the first wave is almost never the largest. 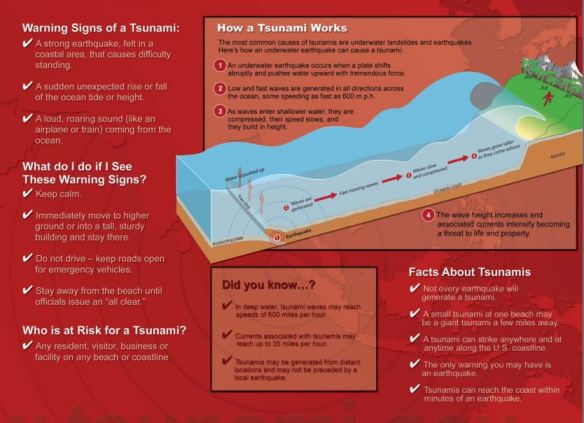 Did you know that since 1850, 54 tsunamis have been recorded or observed in San Francisco? Luckily, San Francisco has seen zero injuries and no significant damage as a result of any of these tsunamis.

WHERE DO TSUNAMIS THAT REACH SF COME FROM?

WHAT ARE WE DOING ABOUT TSUNAMIS?

Here at the San Francisco Department of Emergency Management we have a team dedicated to updating our Tsunami Annex to our Emergency Response Plan. These are the plans City officials will use to guide our response efforts in the event a tsunami impacts San Francisco. Work is also underway to add to and improve tsunami signs around the city in areas of possible tsunami inundation. Many of these signs direct people where to go if a tsunami threat occurs. In addition, we are conducting public outreach and education in tsunami prone areas in the city. Our goal to make sure you know what to do and where to go in the face of such an emergency. Speaking of  . . .

HOW WILL YOU KNOW IF A TSUNAMI IS COMING?

Here are some of the ways you may hear about a tsunami from us:

Though it’s unlikely, a severe local earthquake may cause a near-source tsunami that would arrive within 10 to 20 minutes. Such an earthquake could damage the communications systems listed above, making it difficult for us to send out warning messages. That’s why you should also know “nature’s tsunami warning signs.”

Nature’s biggest warning sign is a strong earthquake, Magnitude 7.5 or above, that results in severe ground shaking lasting 20 seconds or more. “Severe” means it’s difficult to walk or stand while the shaking is going on. You may also see unusual ocean behavior, including a fast-rising flood or wall of approaching water, or unusual receding of water from the shoreline. You could also hear a loud roar, like a train or airplane, coming from the ocean.

WHAT DO YOU DO IF A TSUNAMI IS IMMINENT?

WHAT CAN YOU DO TO PREPARE FOR TSUNAMIS?

There is plenty you can do to prepare for tsunamis; the best part is that it isn’t that different from general preparedness! If you are prepared for an earthquake, flood, or fire, chances are you are well on your way to being prepared for a tsunami. Here are a few reminders and a few new tips that are tsunami specific:

Tsunamis can be scary, but the best way to confront them is with knowledge and a plan. We invite you to celebrate California’s Tsunami Preparedness Week by learning more about tsunamis with us as the week continues. Tune into our social media accounts to learn more about tsunamis. And if you’re up for it, our friend Sue can teach you a thing or two as well:

Just about everyone in the San Francisco Bay Area knows that Super Bowl City is officially open to the public, but for those of us who commute on the ferry or use the Embarcadero BART Station, please note your usual walking route may be affected by Super Bowl City Security measures (now in place). Specifically, the area around the Justin Herman Plaza (also known as the Ferry Plaza) has a 24-hour security perimeter requiring pedestrians to pass through a secured entrance or navigate around it. Bicycles will be prohibited inside the perimeter, as will other items listed on the Super Bowl Host Committee’s website. We also encourage you to add some time to your usual commute as crowds and traffic congestion can also be expected in the area for the Super Bowl 50 events.

For more details on navigating the security perimeter, see this blog post from the SF Municipal Transportation Agency. The SFMTA’s Super Bowl 50 webpage has full info on getting around during the events.